What the heck is Vector-Borne Disease Screening?!?

Home » What the heck is Vector-Borne Disease Screening?!? For as many years as you can probably remember, you were diligently told by your veterinarian to come for heartworm testing sometime in May or June, and just as you diligently applied preventative medication for 6 months to make sure your dog did not get what sounded like a terrible disease, but perhaps one you did not understand very well.

Do not misunderstand me –heartworm is a terrible disease. It truly is a worm that finds home in the heart of its victims, and is transmitted by mosquitos in the warmer months of the year. In parts of the US, it can be transmitted year-round. We have always done routine screening and prevention because the disease is so severe and the prevention is relatively inexpensive compared to the expensive, lengthy and potentially dangerous treatment. Although the prevalence in Toronto where we practice is quite low, with global warming and increasing temperatures, it is a matter of time before we start seeing outbreaks of heartworm in our city dogs.

In recent years, however, we have discussed the growing tick population in Ontario. Lyme disease has been prevalent in areas of the U.S. and Europe for many years now, but we are starting to see increasing number of cases here in our own backyard. Every year we have a handful of dogs testing positive for Lyme disease –and in some cases a tick was never seen, and the dog was considered low risk for exposure.

Long story, short –we have become as, or more concerned about tick-borne diseases than heartworm disease. Although for many years now yearly screening has included tick-borne diseases, we have continued to call it the “heartworm test.” We soon realized we need to shift the emphasis away from heartworm, and talk about the very real risk of ticks.

Apparently our science-minded brains are not particularly creative, because what they came up with was Vector-Borne Disease Screening (VBDS).  What?!To the majority of the population this is basically a jumble of words that have little meaning.

So the next time we get call you to schedule your vector-borne disease screening, we hope you have a bit of a better understanding. In the meantime, we might come up with a slightly more intuitive name…. any ideas from our creative readers? Ticks can be the size of a poppy seed. Can you spot all 5 ticks in this photo?

We are proud to serve the residents of Etobicoke, Toronto, Islington and surrounding communities. 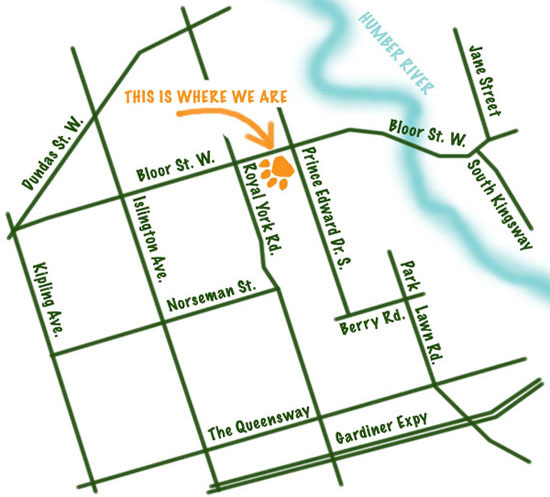